Show Class Mag: So you WANNA be a BORN FREE V BUILDER....?

April Ponderings [with a Posting Note]


[The following is the opinion of myself personally, not as the Membership Coordinator, and does not reflect the views of the remaining Lincoln Land Chapter officers. If they agree with me on this, that’s fine, but for now this is my beef and mine alone.]


We had hoped to have an opportunity to do some “real” outreach at the Quaker Steak & Lube (QS&L)  bike nights this year, but corporate America reared its ugly head and we got a chance to see QS&L for the money grabber it truly is. They were really excited to give us the opportunity to increase our exposure, expand our reach to the next generation of riders and builders and make some good connections… as long as we came up with the cash to play. They didn’t want to hear anything about our plight, give consideration to the fact that we are a not-for-profit legislative rights group, or that we represent  the motorcycle community and the culture – they just want to push some more wings and beer and collect  fees from the participants.


At least when I take my scoot out there, I can put a flyer on the rack and a few brochures on the saddlebags until they ask me to put them away or leave.


I’m not sure where we go from here. My suggestion is that you get a few buds together and go on out to the events, check out the bikes and have some onion rings and a beverage. There will be plenty of riders there, and it will be a great time to talk with them about rider rights, legislative concerns, customizing your machine and managing your bike ownership and operation. (Sound familiar? I think I’ve written that before…) They might not want us to make a “formal” presence at their events as a positive motorcycle entity, but they can’t keep us from spreading a little good on the blacktop one on one.

Back in August, I wrote about my Uncle Brent being the person who first exposed me to motorcycles and that it would be pretty cool getting to ride with him someday. Well, early in February, the opportunity to share the road with him got a bit closer. My cousin Brett (his son) and I had talked a bit more over the winter about this ordeal and he finally made the decision that the only way to get his dad back in the saddle was to provide him with said saddle.
I had a co-worker in my office before the holidays telling me that he had two bikes for sale and really wanted to get them moved so he could go pick up his new Ducati. One bike was an ancient dirt bike – no good. But the other ride was right in my uncle’s wheelhouse. He had talked about wanting an early to mid-80s Honda in-line. Low and behold, the other bike on the block was a black with blue ’84 Honda Nighthawk S, just what the doctor ordered. A  few emails, a couple of phone calls and soon my cousin and I are loading up my truck with the very bike that I had dreamed about since I lived in Denver back since ’85.
I knew it got delivered a week later when I get a one-word text from my uncle – “Unbelievable”.
It felt pretty good to be part of giving back. Some of us ride just for ourselves, some of us ride for others, and some of us just ride just for the hell of it.  As for me, I’m in it for me, but the rest of the two-wheeled crowd ain’t too bad neither. It’s a pretty good day riding with people you like hanging out with, and I always like hanging out with Brent. Hopefully, this will give him back a little something he lost along the way, that love of riding.
Next… he needs to attend an A.B.A.T.E. meeting with the Heartland Chapter in Pontiac!
“There are no bad riding experiences on motorcycles – except the shallow hostility between American and Japanese bikes.”  --  Tim “Nestter” Renaldi 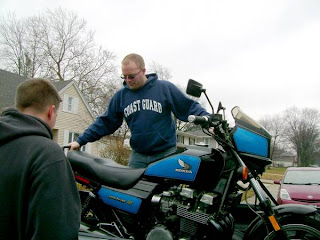 Brett taking in his new purchase to surprise his dad. 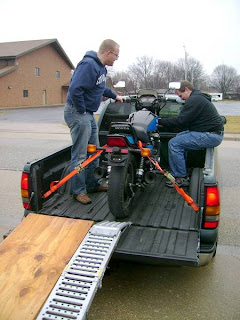 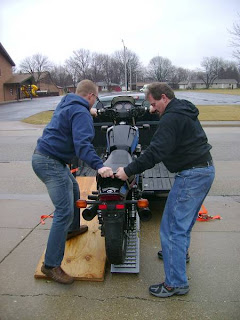 Down the ramp and up the driveway. 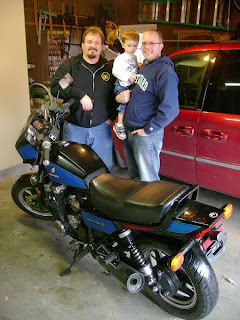 At the Saturday night banquet/awards ceremony at the 2012 ABATE State Seminar, the announcement was made that the Lincoln Land Chapter (LLC) had signed up the most new members over the past year. Although we didn’t achieve the century mark, we came darn close. The LLC took home the tin with 98 new sign-ups (with some question about a possible 99th – you’ll have to ask Pacman about that). For this accomplishment, I really want to thank all of you who went out and wrangled new supporters this past year. I have to be honest, there are a few members who did the lion’s share of the work on this – you guys are the main reason why we accomplished the recruitment level that we did in 2011. For that, I have a stack of brand new membership brochures for you to carry in your pockets or stash on your rides. Some reward, huh? But thanks a ton! You all did a great job of bringing in some new blood!
And while we’re on the topic of membership, this brings me to one of the main reasons we bring new bodies into the fold – Legislation Day! Be sure to mark March 7th down on your calendars to attend this event and make our presence known. The more bodies we can place in the capitol building and the more lawmakers we can meet with eye-to-eye, the better our influence carries over when it’s time for them to consider motorcycle legislation in the chambers. Even though the Red Light Law veto overturn was a HUGE success for the motorcycle riders of this state, we don’t want the legislature to think they threw us a bone. We won’t roll over for any of the “pet project” legislation that might shelter the opportunity to bring back yet another helmet law push. That ain’t happenin’ Ms Flowers!
Also, the new schedule is out for LLC events for this year. Take a look at it and plan some time to attend and participate. If you have anything to add to the schedule, speak up and let us know the who, what, where, when, why for them. Anything that has to do with motorcycling or involvement with the chapter would be greatly appreciated. This will give us some more opportunities to meet and greet these 98 new members that have signed on to stand with us.
“I refuse to join any club who would have me as a member.”   --  Groucho Marx 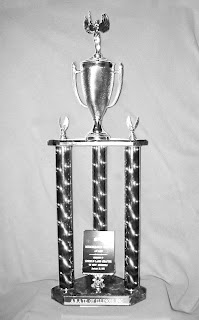 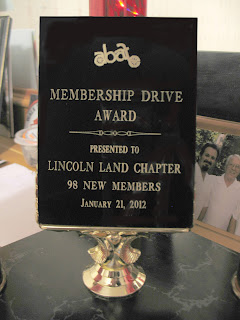 ABATE shirts back in the 70s... [goes with the previous blog] 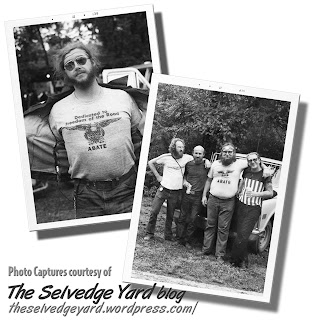 I’m back! – for good or bad, it’s me again, as Membership Coordinator for 2012 (add mumbling comment here).
As the Lincoln Land Chapter puts the 25 year chevron in place celebrating our two-and-a-half decades of standing up for motorcycle rights in central Illinois, it occurred to me that this fight has been going on for a lot longer than that. As successful as A.B.A.T.E. has been here in the Prairie State, other states have had groups in place, keeping up the united front for some time before us. The history of a motorcycle rights group goes back to 1971 when Easyriders Magazine made a call to organize the effort.
My son had sent me a link to The Selvege Yard blog to read about the writing and filming of “American Graffiti.” This blog is a real guy-type of blog about all kinds of things, including some history and adventure with motorized machines. While there, I stumbled across some vintage pix of bikes (I love the ’70s choppers) and events. There I found two images from September and October of 1977 and A.B.A.T.E. shirts were present even back then.
A.B.A.T.E. of Illinois, Inc. has been around in since 1986, but A.B.A.T.E. was first incorporated in Illinois in 1975. It seems that even though we have had much success over the past 25 years, we still battle the same issues from the same governmental processes that we were facing even back then.
* * * * * * *
“…Individual bike clubs can go before city councils, state legislatures, and congressional committees, but as single clubs, and unprofessional at the game of politics, their efforts are usually futile.
Scattered, unorganized, individual efforts have little if any effect against the power structure.
The major problem is not any particular anti-bike movement or organization - the problem is that the people who make the laws are people who know nothing about bikes. The little old lady writes her congressman and complains. There is no one offering rebuttal -- intelligent, professional rebuttal -- to her unfair charges. The congressman, who doesn't hear any arguments against what the old lady said, but does want to please everybody and does want to get elected again, introduces a bill to ban whatever was bugging the old lady. The bikers in the area don't see the small item, buried in the back of the newspaper along with the hemorrhoid cures, announcing the proposed law for all bikes to have roll bars. Since no one sees it, no rebuttal is offered, and the law is passed. Or if it is seen, and a club or two protest, it isn't a loud enough protest, or it is a disorganized protest, or an unprofessional protest, and as a result the law is passed.
We need a national organization of bikers. An organization united together in a common endeavor, and in sufficient numbers to be heard in Washington, D.C., in the state legislatures, and even down to the city councils.
We must present our case and defend it vigorously.”
© Copyright 1971 Easyriders Magazine (October)
* * * * * * *
“…The letters stand for A Brotherhood Against Totalitarian (i.e., strict control by coercive measures; completely regulated by the state) Enactments (i.e. to make (as a bill) into law).
…We must present our case and defend it vigorously!
Our mission is positive. We want to educate the lawmakers, to give them our side of the story, before laws are enacted, and we are devoted to working aggressively toward the abatement of all unfair, unjustified, arbitrary anti-bike laws everywhere.”
© Copyright 1972 Easyriders Magazine (February)
Our name may have changed a little, but the sentiment is still the same. But I can’t decide if we have made that much progress in keeping motorcycles a legal means of transportation with the modest amount of regulation that has been placed on our machines or if we are just maintaining the status quo for actually educating the public and government as to our interests and beliefs. We’ve come a long way, but then again, we’re still fighting the same demons.
As the article read, we must present our case and defend it vigorously. Otherwise all the work that was begun 40 years ago will be a largely wasted effort. So I guess we just keep moving on and work for our rights and our freedoms as motorcyclists, just like the riders and builders of those sweet choppers did before us. Far out!
“America will never be destroyed from the outside. If we falter and lose our freedoms, it will be because we destroyed ourselves.”   -- Abraham Lincoln
Posted by GoGo at 2/25/2012 02:55:00 PM No comments: